Appearing at the Munich Security Conference, the Polish Prime Minister Morawiecki was questioned yesterday by an Israeli journalist who told of his mother’s escape from the Gestapo in Poland after learning that Poles were planning to denounce her family (if that’s true, how did they survive the Holocaust, if not with the help of Polish gentiles?). The famous investigative journalist of Yedioth Ahronoth and New York Times, Ronen Bergman (who seems to have never read the Polish IPN bill), asked if by telling his family story, “I am a criminal in your country?”

The remarks of Morawiecki triggered hysterical reactions of Israeli leaders who, as always, desperately defend the Jewish monopoly for the WW2 narrative and reject the historically obvious facts of disgraceful behaviour of the Jewish councils and the Jewish ghetto police.

Thou shall never compare The Holocaust with any other Genocide!  says one of the ‘Ten Commandments’ of the ‘Holocaust Religion’*. This commandment serves the purpose of mythologization of the Jewish suffering and prevents a normal historical analysis, as one of the common and important scientific methods is the comparison. Professor Yeshayahu Leibowitz turns in his grave.

*For details on the ‘Ten Commandments’ of the ‘Holocaust Religion’ please refer to “Holocaust Religion and Holocaust Industry in the service of Israel” by Shraga Elam (Elam is an Israeli investigative journalist based in Zurich/Switzerland).

A Tangled Web: Polish-Jewish Relations in Wartime Northeastern Poland and the Aftermath by M. Paul 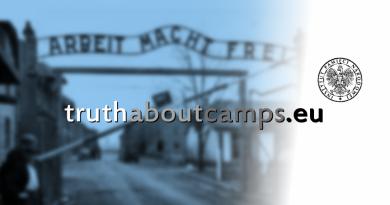 Reaction of the IPN to a feature in “The Washington Times”

“Complicity in the Holocaust”: No Double Standard on Polish and Jewish Collaboration